Lots and lots is changing around us and our dogs during lockdown and those changes are not coming to an end any time soon.

One constant, that seems to have become more and more popular, probably out of necessity, are suburban dog walks around housing estates, green areas and suburban parks. With lockdown fully in swing, everyone is limited in where they can take their dog for exercise. And it seems that everyone is getting out more often, with their dogs, at irregular and less predictable times.

With our beach trips and hikes outside the 2km restriction, Deck and I are walking in local suburban areas more than we ever have before.

But suburban walks are not all they have cracked up to be, and even when things are more normal, I don’t know that this is the most beneficial or even safest way to exercise many dogs.

Let’s have a think about what suburban walks actually are; how do they function in the lives of dogs?

Prehistorically, these trips, with dogs accompanying their humans, likely served some specific functions; the outings were probably more goal oriented and survival related, rather than just for exercise or to get out of the house.
Dogs may have accompanied our ancestors on hunting and foraging trips, on security and boundary checks, monitoring prey and predator behaviour, territory inspections and so on.

What about now? How do suburban walks function for dogs now? Looking at the sorts of behaviours they demonstrate while out might give us clues; walking about a regular route, sniffing, marking, (and probably some chasing in there too) seem to be the most regular behaviours observed.

Getting wound up for walks

It’s no wonder that most dogs get pretty wound up before going out. A level of arousal (emotional excitement) will be necessary to prepare the dog for the challenges to come;  patrolling is a big deal and an important job, after all.

Preparing to patrol and then actually patrolling requires that the dog narrow their focus and prepare their body to do their ‘job’ and that resulting arousal can lead to lowered thresholds for aggressive responding and stress related behaviour.

If we add lots of physical exertion to these outings, the dog’s body is preparing for that too, and if your dog is fearful or “reactive”, they are preparing to face triggers and deal with all that drama on top of everything else.

All of this means that the dog’s stress responses are engaged and ready to go; they need to get psyched up to be ready for patrol.

Even at the best of times, I don’t think traditional dog walks, often more military style than dog centric, are the greatest approach to providing dogs with appropriate exercise.

Instead of a walk, make it a suburban SNIFF!

Make it all about sniffing, rather than prioritising distance covered, steps counted or specific routes. Sniffing for a long time, as long as possible and as long as they need to.

But, this can be difficult to maintain in a more calming way in suburbia. The dog moves from marking to marking, many will be recent urine-marks so quite exciting, and there is one after another in quick succession.
You will have seen your dog move from sniff to sniff, quite quickly. This ramps up the excitement, one sniff after another.

Suburbia has changed; it’s more built up and more people seem to have new and young dogs. Pet owners want to be able to walk their dogs around their neighbourhood, but this might not work for all dogs in all neighbourhoods.

This suburban-walking business is certainly a challenge for dogs, and even more so now when there are more people out walking and it is harder to find regular quieter times and places.

Use this to improve loose leash walking behaviour. Start with a “Go Find It!” and toss every couple of steps to prevent your dog ever pulling. As they start to watch you in anticipation, you can build the number of steps between each cue.

Play when a dog or other trigger appears; cue Go Find It! and toss rewards away from the trigger; keep tossing to keep them moving on, if required. 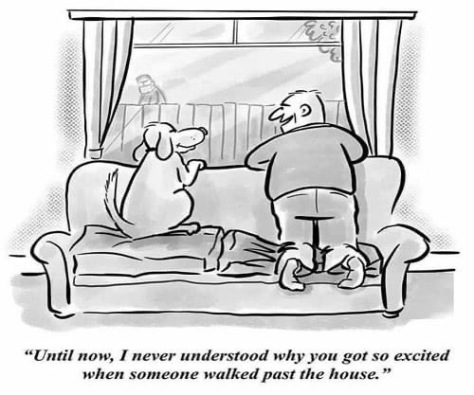 Dogs have in-built social rules, especially in relation to unfamiliar dogs. These are often in contrast to what humans want or think should be done. For this, you gotta be more dog. 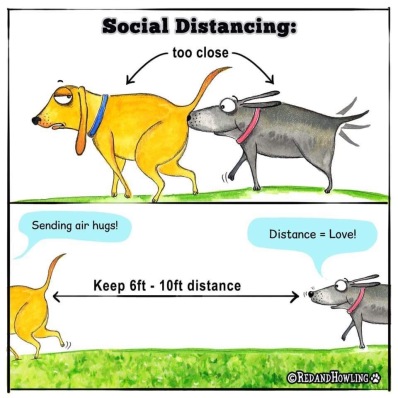 Keep activities on walks lower key – it’s already super exciting to be out in the world. Patrolling. You don’t need to add that much more excitement.

Play sniffing games to encourage problem solving and focus on something other than the goings on:

Stop regularly to take a break and snuffle:

Whose walk is it anyway?

Since lockdowns have been put in place, one of the few outlets available for people have been walks in their local area. Pet owners have rejoiced and brought their dogs out with them; in some cases this has been unusual and a new thing for dogs.

Make sure the dog’s walks are more dog; take time to let them sniff at will, engage with them, and keep them from becoming frustrated with human behaviour.

Ancient dogs probably had a whole lot more choice in their day to day lives than do our modern pets; they may have wandered largely at will so outings with humans were likely supplementary rather than being the central focus and highlight of each day for the dog.
Their patrols, and lifestyle outside of patrolling, were different.

Dogs today are largely socially isolated from other dogs and humans (but probably not so much, right now), they live pretty under-enriched lives but expectations, of their behaviour, have never been higher.

Just a few short decades ago, dogs were not required to be confined to their owner’s properties, they had company most of the day as in most families, one person worked in the home, and the population of dogs was different.

The tendencies and skills dogs need to inherit AND develop to cope well with all that suburbia throws at them, may be elusive in lots of dogs.
People placing dogs, in whatever context, need to carefully consider this, as do prospective pet owners. If suburban walks are largely what you are offering, very very careful thought and planning needs to be in place for the right dog.
Dogs, even puppies, are not just clean slates that we can bend and mold to our will.

Pet owners are different too. A social media explosion in dog popularity has contributed to real dog behaviour and real expectations of dog behaviour becoming lost, or at least romanticised.
This idea that all dogs should be frolicking in Utopian daycares, groups or dog parks is just plain damaging.

Sue Sternberg has a great saying, something along the lines of “Reactive dogs are born, and also made, by other people’s “friendly” dogs.” (if you have a better memory than I, or remember the source, please correct me).
Letting your dog become magnetised to other dogs and allowing them carte-blanche with every other dog and in groups of dogs might not be helping you and may not be beneficial to your dog’s behavioural health, certainly long term.

The world is different and it’s more different to just a couple of months ago. Getting back to ‘normal’ will be a culture shock for everyone, including our dogs.
Let’s make sure we help them now, preventing more serious stuff down the line.

2 thoughts on “A good walk spoiled”