And it seems that our dogs’ ancestors may have a tendency toward inter-species play based in human social cueing, with even wolf pups showing a tendency toward fetching for an unfamiliar human. (Wheat & Temrin, 2020) This type of interaction is likely a long-standing part of our relationships with dogs.

Despite this, fetch is far from my favourite doggie game or means to exercise active dogs.
Now, before I have card-carrying members from Fetchaholics Anonymous after me, I am not saying your dog can’t play fetch games. But, if fetch is the predominant form of exercise your dog gets, this is very much for you.

Confession time. I have my own ball-addict who will and has chased and caught a ball repetitively many many times in his life. But, for Decker, this forms a tiny proportion of the exercise, play and entertainment he has access to, especially as he ages.

Fetch isn’t a dirty word, but…

I don’t want you to think that we can’t talk about fetch games but, it’s important that we take care.
For lots of reasons, intense, and especially, repetitive fetch playing may be having impacts on your dog that is detrimental to their health.

Some problems with intense and repetitive fetch, especially when it forms a lot of the dog’s exercise, may include: 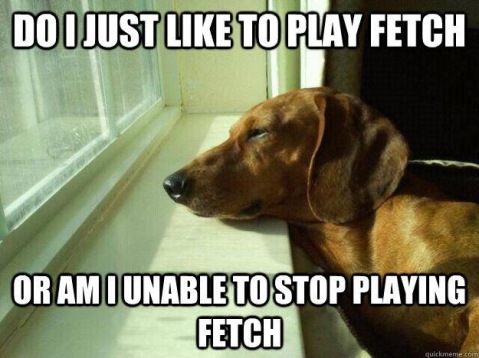 I am not at all suggesting that the above is an example of peer reviewed research, or similar, but it is a quantitative representation for something I, and many colleagues, have observed time and time again.
Fetch brings every thing up, while sniffing, especially structured and goal-oriented, brings it all down again.

Both provide the dog with exercise, and can cause tiredness that so often seems to be the goal, but sniffing appears to be all the more satisfying, mentally and physically, despite not bringing a high level of increased physical exertion. We can give the dog what he needs, without the nasty side-effects.

Too much of a good thing

Observe the dog that is engaged in or anticipating a repetitive fetch game: tense muscles, intense focus, dilated pupils, exertion breathing, tongue hanging out until the moment of the toss and then the mouth tightens, as he holds his breath, concentrating on the ball.

Chewy is desperately waiting for the ball to be kicked or tossed, letting
him experience that high again.

This describes the behavioural responses to stress. Stress can be good or bad; the good allowing the dog to get this job done…the bad may include all those side effects when we take this too far for too long.

Just like human marathon runners or other daredevils, dogs can become adrenaline junkies and thrill seekers too.
They are seeking that next high, brought about by the chemical releases associated with exertion, and trying to put themselves in situations that allow for that chemical hit that goes with those spikes in arousal.

Fetch is a fix, for a lot of dogs.

Play Find It! Instead

Turn fetch-time into a Find it! game by hiding the ball for your dog to hunt down, rather than just chasing.
This provides for better enrichment by ticking so many more enrichment and predatory needs boxes for dogs, while also maintaining physiological responses at a more even keel.

Neither you or your dog need to go cold-turkey. Introduce Find it! games into your existing fetch-time.
Throw the ball a couple of times, hide it and have a find it, then toss again and repeat.

To help with the hardened fetchaholic, take it slowly so as not to cause frustration:

You can mix in all these variations or just add them in gradually to help ease your dog off repetitive fetch.

Play other games with balls too, so that a ball or throwing toy doesn’t just mean the dog should anticipate feeling that high.

One of those balls is more special than the others…

Make a foraging box of balls, with food rewards hidden within:

Mix it up & play in rollercoasters

Rollercoaster games are structured to make sure that your dog hits that high, and then comes down again, over and over to really help prime their systems for recovery from arousal.
Not just that, you can think of your dog’s day like a rollercoaster, making sure that you are helping him come down after every spike in excitement in day to day life.

These games are my go-to to help dogs cope with arousal better as they are just so effective, and it’s all through play which brings lots of its own benefits for pets and their people.

Play with a toy or ball on a rope for versatility.

We are prioritising taking the emphasis off repetition. A good rule to consider: don’t do the same move or activity more than two or three times in a row.

A tired dog is not necessarily a good dog so don’t make exhaustion your goal.

Fetching until your dog is exhausted, just raises those arousal baselines, while neglecting to provide a balance of mental and physical exercise. Your dog gets wound up and then has nowhere to go; even though their body might seem tired, the rest of them is buzzing.

Enrichment and appropriate challenge facilitating behaviour health are better for everyone and exhaustion shouldn’t play a part.

The toy is not the game

Don’t make play about a toy or item. These are merely conduits through which fun and connection happens between pet and person. Play for real.

If you can be substituted by a mechanical device, it’s probably not play and it’s certainly not connection.

This takes practice. Even a fetchaholics like Chewy and his awesome human can learn about playing for connection rather than for ball-throws.
It’s going to take more input and effort from the owner and that’s why this can be a tricky sell.
You are not just an automatic fetch machine. You should be much more than that to your dog.

Play is not about winning

For play with connection, make sure that the dog is in possession of the toy most of the time. While it’s important that we teach our dogs reliable toy releases (more here on teaching releases) for many reasons, getting the toy back or keeping the toy, “controlling” the game, or making sure the human wins, have nothing to do with it.

That’s not play. That’s competition. And where’s the fun in that?

Make the fun happen with you, while your dog just happens to have the toy. This is particularly important with puppies; we are laying the foundations of our relationship with them, and that’s best done through play. (Who doesn’t want to play with puppies?!)

Take the pressure off both you and your dog; not winning is not conceding anything. Leave the toy to the dog, and you just make it fun when there’s a human attached or involved.

When we need to get a little more responsiveness in there, we can use this same approach. By making sure that you make the toy fun, your dog will want to bring it you and have you involved because that’s what makes it great!

The toy is not the reward

The joy in playing is that we play for play’s sake. A ball, food rewards or other extrinsic things may or may not be present, but the point is that the play, and all that brings, is what we’re in it for.

For Decker, him getting to hold and bite on a toy, even if it’s not the focus of the game, helps to give him a better outlet for his excitement and something else to bite, other than human bits.
Playing without a toy takes even more practice, especially with a dog who likes to bite on things when wound up (that’s Decker!).

Play skills are some of my most favourite things to work on with pets and their people. And it is quite literally a game-changer for you both.

The high expectations of dogs, and their behaviour, are such that pet owners presume that their dogs will just play with them, and that human behaviour easily elicits play in dogs. Not so.

Play is just like any other behaviour (except that it’s truly magic) in that it requires practice and building. It’s the cornerstone to excellent pet-person relationships and it’s fun – this should be any easy sell!

Go play, ‘cos your dog is here for a good time, not for a long time!

#100daysofenrichment is the best way for you to provide your pet with the most enriched life.
With lots and lots on play too:

That’s a play-skills tutorial right there!