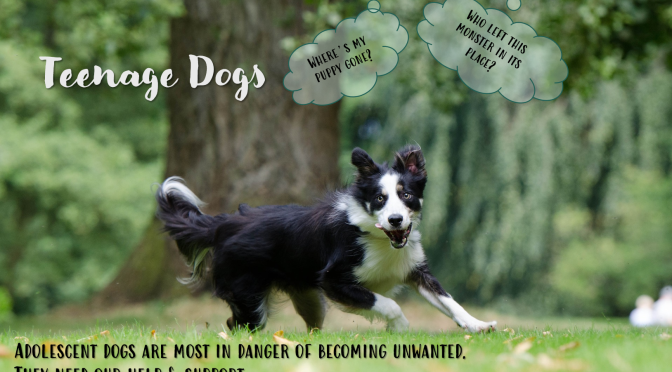 Teenage dogs are much maligned, indeed they are most at danger of becoming unwanted.

Although the adolescent period of development in humans and non-human animals is relatively poorly studied, recent work has shown similarities between some of the struggles of both human and canine teenagers, and for their care-givers.

The teenager-care-giver relationship can certainly be quite delicate around this time (you might remember your own teenage years…) often with increased conflicts.
Asher et al, 2020, found that, just like human children, canine adolescents show changes in responsiveness and the quality of teenager-care-giver relationship impacts this sensitive time.

That tells us that the dog/human relationship must be prioritised before adolescence and throughout so as to maintain understanding and support, and to keep dogs in their homes.

Pet owners of canine teenagers need support and to know that they will survive this period…it might not be pretty, but you will get through it. Help must be non-judgmental and without dwelling on blame.

We have talked a lot about canine adolescence before, with some detail about things that you can put in place: Where is my puppy? (Or, why adolescence is so tricky)

Canine adolescence starts from about 5.5 months until about 2.5 years and brings about all sorts of challenges for both the teenager and their owner.

Given the sort of brain, endocrine and body changes the teenager experiences, it’s to be expected that they might display problematic behaviour.

The dog’s behaviour is information so while teenage behaviour might be a problem for us, it’s generally a good sign that the adolescent dog is asking for help…in a not very helpful way!

Teenage dogs don’t require fixing, they’re not broken, but they do need more understanding, a ton of patience and some proactive programs to support and guide them.

And pet owners need support and help to reframe the canine teenager dilemma, allowing them to push labels aside and see what their adolescent dog really needs.

Remember, your teenage dog isn’t trying to give you a hard time, they are having a hard time…seriously….I promise…!